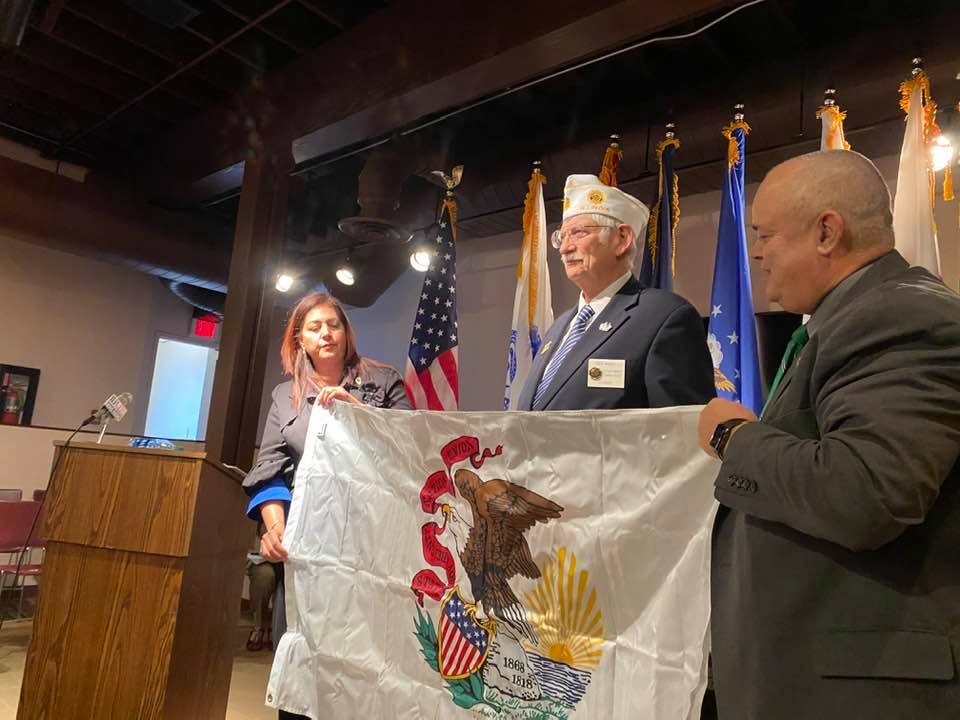 Director Linda Chapa LaVia of the Illinois Department of Veterans Affairs gave remarks about Operation Desert Shield and Desert Storm. She asked all Desert Shield/Desert Storm Veterans to join her at the podium as she spoke. The oldest Veteran in attendance from the war received an Illinois Flag from Rep. Swanson.

Desert Storm, the final phase of the Persian Gulf War, was initiated by Iraq with United Nations authorization by a coalition force from 39 nations to expel Iraqi forces that had invaded Kuwait on August 2, 1990.

Air attacks began on January 17, 1991 , and were followed by a ground assault on February 23. The coalition forces ceased their advance and declared a cease fire on February 28, 1991, 100 hours after the ground campaign started.

February 28, 2020, marks the 28th Anniversary of the cease fire announcement of the Persian Gulf War. We thank all the men and women who served our country in Operation Desert Shield and Desert Storm.

Rep. Swanson spoke about the sacrifice of Illinois service members and the impact they had on the War as well as his own military experience at Ft. Bliss, TX during the War. The State of Illinois has so much to be proud of as we reflect back on this Anniversary.  1,371 soldiers and airmen from the Illinois Army & Air National Guard took part with more than 75,000 citizens soldiers from across the country in Operation Desert Shield and Desert Storm.

Illinois C-12 aircraft were the first fixed-wing, non-tactical aircraft to land at the liberated Kuwait City airport.  Many served both abroad and at home in support of the missions.

Along with a proud and grateful nation, Illinois remembers the ultimate sacrifice made by 18 service members during Operation Desert Shield and Desert Storm. May their sacrifice continue to be honored and their families held in our hearts forever.