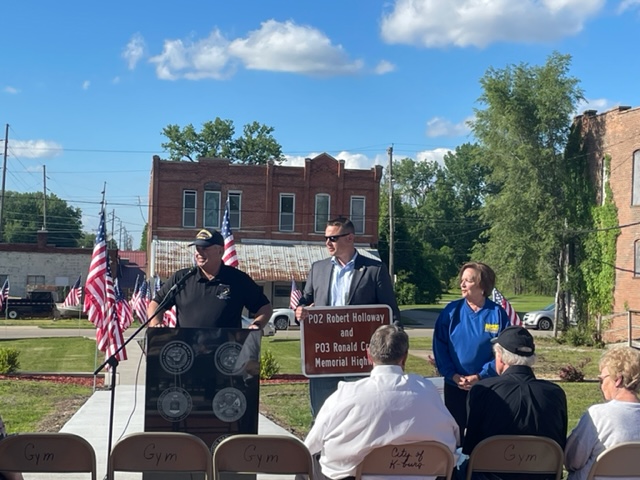 State Representative Dan Swanson made the following comments on Friday, May 27, 2022:

Good evening and thank you for joining us.

This weekend communities around the U.S. will pay tribute to men and women who gave their life for you and me.  Tonight we recognize two local heroes, but first let me share a snap shot of Vietnam history.

U.S. involvement in Vietnam started slowly with an initial deployment of advisers in the early 1950s, grew incrementally through the early 1960s and expanded with the deployment of full combat units in July 1965.

The last U.S. personnel were evacuated from Vietnam in April 1975.   The VIETNAM WAR was the second-longest war in United States history, after the war in Afghanistan and the First war brought to us live on our color TVs in our living rooms across America.

Approximately 9 million Americans served during the Vietnam era (Nov. 1, 1955, to May 15, 1975). More than 6 million are still alive.  We will always remember those we lost, the over 1,500 missing, unaccounted for and honor those who came home.   Everyone who served… should know their sacrifices mattered and they made a difference.

Promises and commitments to the people and government of South Vietnam to keep communist forces from overtaking them reached back into the Truman Administration.

The average age of the American soldier in Vietnam was nineteen.

President Nixon signed a ceasefire in January 1973 that formally ended the hostilities. In 1975, communist forces from the north overran the south and unified the nation.

Robert Harry Holloway, was born 28 December 1942, in Keithsburg, IL.  He achieved the rank of Petty Officer Second Class in the United States Navy.  As an Aviation Ordnance man (AO) he was a weapons specialists charged with managing all types of ammunition carried on Navy aircraft. His responsibilities as an Aviation Ordnance man most likely included:  Inspecting, maintaining and repairing mechanical and electrical weapons and ordnance systems on aircraft. His unit was the VF-211, CVW, USS Handcock, Task Force 77, 7th Fleet.  He served on the USS Hancock, which was for eight years, inactive until 1954 when she was recommissioned and modernized to deploy to the Far East, where she spent two years. After that, the ship became a part of the Seventh Fleet in the Pacific, helped in the Vietnam War, and decommissioned 30 January 1976.  The Task Force served South Vietnam, offshore province and military region, Un province.  Petty Officer Second Class Holloway was Killed In Action: 20 February 1966 at the age of 24, through non-hostile action, accidental drowning and his body not recovered in the South China Sea.  He served from 1961 to 1966.  His decorations include the National Defense Service Medal, Vietnam Campaign Medal, Vietnam Service Medal, and the Purple Heart.  You will find his name on Panel 13E, Line 48 on the Vietnam Wall, Washington D.C.  People still post birthday wishes to Petty Officer Second Class Holloway at the “Vietnam Virtual Wall” website.

Would any friends or family members like to make any comments?

Ronald Alan Crose was born 10 December 1945 in Keithsburg, IL.  He achieved the rank of Petty Officer Third Class in the United States Navy.  As a Gunner’s Mates he was responsible for all gunnery equipment, guided-missile launching systems, rocket launchers, large guns and turrets, along with all associated equipment used by the USN. He too was assigned to the 7th Fleet, Task Force 116, River Division 52, Yrbm-16 (YRBM – Yard, Repair, Berthing, and Messing) He was serving in South Vietnam, Phong Dinh Province when he was Killed In Action 24 November 1967 at the age of 22, from an Explosive device to his craft.  According to witnesses it is assumed that a VC swimmer evaded the nets and placed the bomb on the bulkhead between the engine room and RD522s berthing space.  You will find Ronald Alan Crose’s name on Panel 30E, Line 75 on the Vietnam Wall, Washington D.C.

Would any friends or family members like to make any comments?

For some of you, one marker, one private monument will always stand out among all the others. For some, it’s the thought of a Brother, Son, Uncle, cousin or friend that they will never know or meet. For others, it’s the memory of a last kiss or hug, a last wave or wink or a parting wisecrack from a friend or family member, perhaps a brave smile from a son who seemed so much like just a little boy when you last saw him. And some today remember the loss you felt when you found out that your loved one would not return home.

If ever you think that one person, just one hero whose name is chiseled on our battle monuments can’t make a difference, couldn’t make a difference, didn’t make a difference, you’d better think again. Tens or even hundreds of years from now, your children, your grandchildren, your great-grandchildren, God willing, will continue to enjoy our precious freedoms, in part, because of the sacrifices of the people whose names are etched on those monuments over there.  We enjoy our freedoms today because farmers laid down their pitchforks, merchants hung gone to war signs on their front door and blacksmiths were willing to re-tool their shop to support the Revolution.  These same commitments and sacrifices have and still does continue today.

Ronald Reagan, the Great Communicator, put it like this: “Freedom is a fragile thing and is never more than one generation away from extinction. It is not ours by inheritance; it must be fought for and defended constantly by each generation, for it comes only once to a people. Those who have known freedom, and then lost it, have never known it again.” We should thank the good Lord every day not that these men died, but that they lived, fought and willingly sacrificed so that we can remain a free people.

Your loved ones named on those signs over there, like the million more who’ve died while fighting for your freedom, have heard their Taps. They sleep safely, in honored glory, beneath that beautiful flag, somewhere in the good Earth or in the calm depths of the seas. They sleep and wait for us to join them in that rest that comes, eventually, to all of us.

But we will see them again. One day soon, the Good Book tells us, the trumpet will sound Reveille, and those resting will awaken from their slumber: young, vital, incorruptible and ready for eternal service in the heavenly army of an everlasting Sovereign. Until that day comes, remember what they gave you and be thankful, not just on Memorial Day, but every day because you wake up on top of the world simply because you wake up American and free.

WHEREAS, It is highly fitting that the Illinois General Assembly pays honor and respect to the truly great individuals who have served our country and, in so doing, have gone above and beyond the call of duty in truly heroic acts; and

WHEREAS, Robert Holloway was born in Keithsburg on December 29, 1942 and served in the U.S. Navy, achieving the rank of Petty Officer Second Class; he died while serving his country in South Vietnam on February 20, 1966; and

WHEREAS, Ronald Crose was born in Keithsburg on December 10, 1945 and served in the U.S. Navy, achieving the rank of Petty Officer Third Class; he was killed in action while serving his country in South Vietnam on November 24, 1967;

therefore, be it RESOLVED, BY THE HOUSE OF REPRESENTATIVES OF THE ONE HUNDRED SECOND GENERAL ASSEMBLY OF THE STATE OF ILLINOIS, THE SENATE CONCURRING HEREIN, that we designate 76th Street in Keithsburg from Jackson Street to IL-17 as the “PO2 Robert Holloway and PO3 Ronald Crose Memorial Highway”;

and be it further RESOLVED That the Illinois Department of Transportation is requested to erect at suitable locations, consistent with State and federal regulations, appropriate plaques or signs giving notice of the name “PO2 Robert Holloway and PO3 Ronald Crose Memorial Highway”; and be it further

RESOLVED, That suitable copies of this resolution be presented to the families of PO2 Holloway and PO3 Crose and the Mayor of Keithsburg.