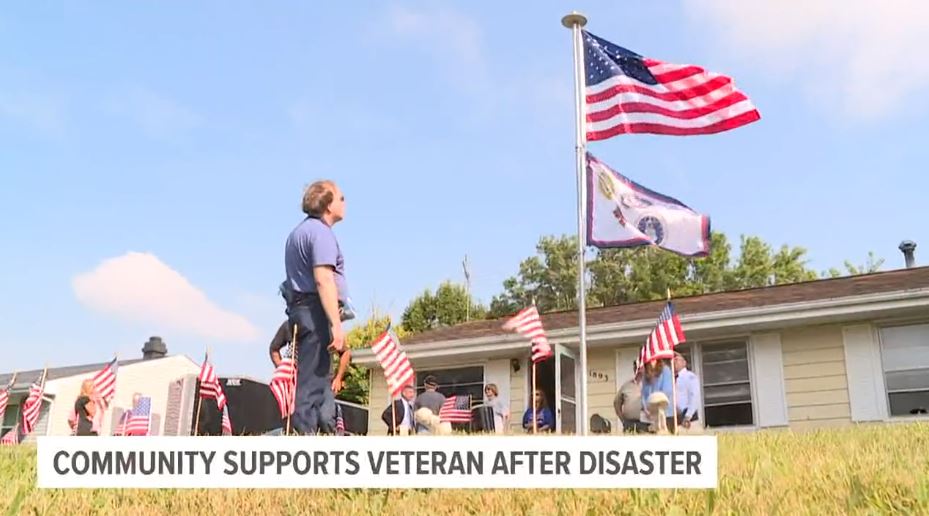 GALESBURG, Ill. — There’s a flood of support pouring from the Galesburg community for a combat veteran whose life was recently turned upside down.

Last winter, the inside of Mike Lawson’s home was destroyed after his home furnace broke and water pipes busted, leading to several feet of water rushing into the building.

“They knew they couldn’t stay there,” brother-in-law Rick Ward said.

Mike and Tami Lawson were returning home from an out-of-town trip when they noticed the disaster.

“They didn’t tell no family members until 3 weeks ago,” Ward added. “They lost everything.”

Ward eventually found out about the disaster and made a call for help over social media.

He also got to work on cleaning up after he learned there was a major problem on their hands.

“I told her I got this,” he said. “I started tearing everything out.”

Ward’s call ended up turning into the community’s fight to save Lawson’s home. With local and state leaders of all sides coming together.

“There’s just been people from all over the place that have came and it’s just amazing to see,” volunteer Emily Philbee said.

“Helping a veteran out, it makes you feel good when you can actually see a smile of the veteran today for the first time,” Swanson said.

“They are the ones that have done this, not me,” Ward said.

Mike was able to see his home for the first time, Thursday, Aug. 25, since moving out to allow for repairs.

“It’s a lot to take in,” Mike told his brother-in-law.

Knoxville American Legion Commander Harvey Schofield also presented an American flag and handmade quilt to Mike. The flag was installed on Mike’s flag pole outside of the home.

“The veteran had their back in war and now our community is coming and saying, we’ve got your back,” Swanson said.

A lot of work is still left to do on the Lawsons’ home, and his family is working with contractors for additional repair arrangements.

“God will continue to take care of this house,” Rick said.

In addition, one of the couple’s most valuable possessions were saved.

“They got her wedding dress,” Rick said. “And I seen that military uniform. That got me.”

“A soldier’s strength will overcome his weakness,” Rick said. “Tami is his strength.”

If you would like to help the family, you can contribute through the GoFundMe page by clicking here.