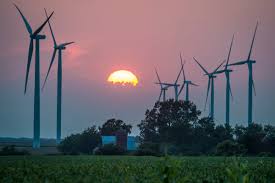 The event at the Woodhull Travel Plaza included the presentation by Invenergy of $5,000 checks to the Clover and Andover-Osco fire departments.

According to Invenergy, the 53-turbine project will create more than $10 million in benefits to local economies during its first 10 years through property taxes, lease payments to landowners and employees’ wages and benefits.

Jim Shield with Invenergy said the project was 10 years “and a lot of people” in the making. He noted Invenergy now has been involved in 14 projects that have created 1,500 megawatts of energy serving 500,000 homes. “I appreciate everyone’s effort, time and support, because, without it, we wouldn’t be here today,” he said. “Safety is a core value around high-voltage equipment. We want to make sure everyone gets home every night in the same condition as when they left.”

Woodhull Mayor David Holmes noted how much the use of wind has changed the area’s physical and financial landscape. Historically, he noted, windmills could be seen throughout the area, next to or over the top of concrete water tanks for livestock.

“Now they (wind turbines) dot our countryside, and that’s a good thing,” he said. He said the area has had a “very friendly, very cordial” relationship with Invenergy.

State Rep. Daniel Swanson, R-Alpha, said Illinois contractors received $24 million from the wind farm project since Phase 3 construction began in August. At its peak, he said, the project supported 214 jobs. He said there would be five permanent jobs related to the work, adding Invenergy is dedicated to hiring veterans.

According to Swanson, each of the 53 turbines required the equivalent of one acre of concrete 4-inches thick. “That’s a lot of wheelbarrows full,” he said.

The total assessed valuation of Phase 3 is $19,080,000, bringing the total valuation of all three phases to $52.8 million, according to Henry County Supervisor of Assessments Lindi Kernan.

According to officials Friday, the Phase 3 turbines added $13 million, or 18 percent, to the total valuation of the Alwood School District. The district will see a little more than $1 million in new property taxes related to the turbines.

“This helps the schools have better control, because it’s local dollars,” said Swanson. He recalled an analogy by superintendent Shannon Bumann, asking how many school districts have had 53 $1 million homes built this past year.

State Rep. Tony McCombie, R-Savanna, said the wind farm was an amazing thing to see up close. She said she attended Friday’s event to be a good neighbor and “to try to get (the wind energy firms) to come our way.”

On Thursday, WEC Energy of Milwaukee, Wisconsin, announced it was buying 80 percent ownership interest in Bishop Hill Three for $148 million. The transaction is subject to approval by the Federal Energy Regulatory Commission.

Mike Peters of WPPI Energy that will benefit from the project said the company received more than 60 responses to a request for proposals for renewable energy projects.

“Bishop Hill Three came to the top as a great resource that would fit with our portfolio,” Peters said.

He said that, having done business with Invenergy in the past, WPPI knew the project would get built. The project will allow WPPI to reduce its carbon dioxide emissions by 40 percent compared to what they were in 2005, Peters said.

In 2006, Invenergy received 266 special use permits from Henry County to construct three phases of wind turbines.

TerraForm Power bought a controlling interest in the 98-turbine Phase 1, built in 2012. Invenergy still contracts with TerraForm to operate Phase 1.