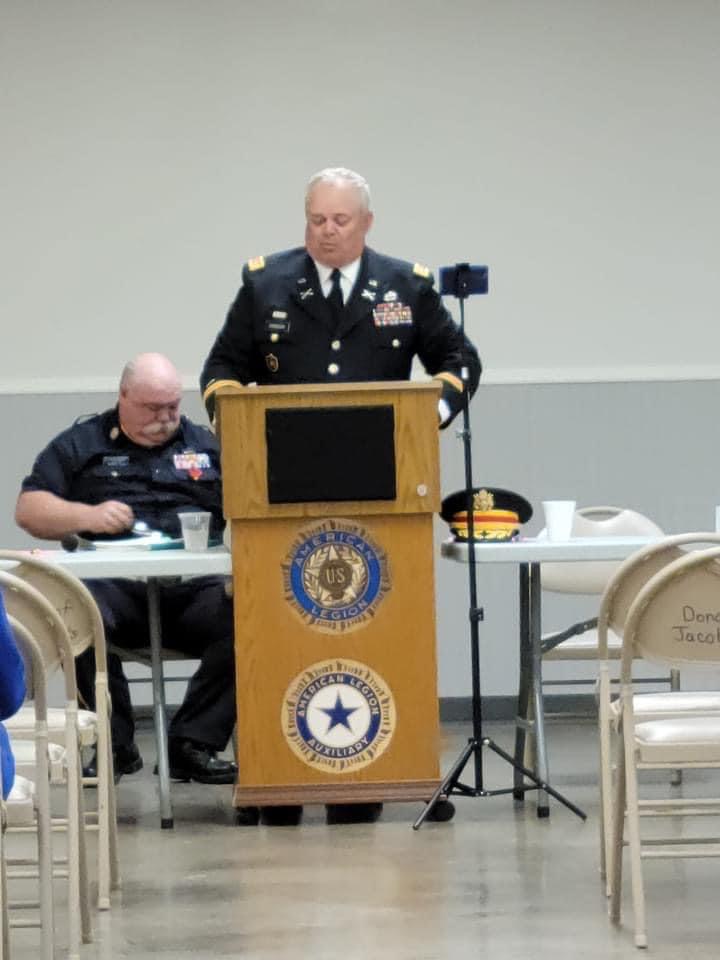 State Rep. Dan Swanson was the guest speaker on Monday for the Memorial Day Service in Monmouth, Illinois.

“Always Remember, Never Forget. I was honored to speak at the Memorial Day Service hosted by Monmouth American Legion, VFW and Auxiliary,” said Rep. Dan Swanson. “Today we remember the sacrifice for us, living on the land of the free and home of the brave.”

Excerpts from my comments on Memorial Day:

Good morning and thank you for inviting me to be a part of today’s Memorial Day Service.

The concept of Memorial Day can be traced back to Illinois, where Illinois Congressman John A. Logan left the U.S. Capitol in Washington, D.C. when the Civil War began and, in his civilian clothes, joined the Virginia Regiment.  Logan later volunteered with Company H of the 1st Regiment of Illinois Volunteers.  Logan, a Civil War hero who became a general, grew up in Murphysboro, Illinois.  In 1868 General Logan issued General Order No.11, which stated. “The 30th day of May, 1868, is designated for the purpose of strewing with flowers or otherwise decorating the graves of comrades who died in defense of their country during the late rebellion, and whose bodies now lie in almost every city, village, and hamlet church-yard in the land.”  It was Logan who helped spearhead what is today recognized as Memorial Day.  He chose 30 May because it was a rare day that didn’t fall on the anniversary of a Civil War battle.

Memorial Day, originally called Decoration Day, is a day of remembrance for those who have died in our nation’s service. Memorial Day is about coming together to honor those who gave their all.

Serving in the Armed Forces of the United States has always been a noble calling. Since the shots at Lexington and Concord were fired and our Revolutionary War began, the American Soldier has been the defender of liberty and democracy. Since their humble beginnings in 1775, the American soldier has fought and died on battlefields here and abroad to defend our rights and freedoms.

For some, the supreme sacrifice was accepted on the battlefield; others have since passed.  It is to lay a token of respect on their graves that we are here.

Memories of their acts of heroism must never “fadeaway”, as has been said of old soldiers.  It is our task to remember what they said and what they did. We MUST never forget!  Always Remember; Never forget!

The city of Monmouth and her surrounding communities sacrificed greatly to preserve our country’s freedom.  Monmouth’s contribution dates back to the War of 1812 where men marched off to that War and continued through the Civil War, both World Wars, Korea, Vietnam, Iraq and Afghanistan.  Where military might was projected Monmouth’s sons and daughters answered the call.

Our community has been truly blessed and honored with heroes who gave their lives to ensure that we have the freedom to enjoy the blessings given to us by God and assured in Liberty by the vision of our Founding Fathers.

Nor should we forget the family members of our servicemen and women.  They, too, make significant sacrifices and contributions by taking on the challenges of day-to-day life that arise in households that are missing an important component of the family.  Our hearts go out to our departed heroes, the families and friends they have left behind. We owe the “Gold Star” families so much-we must give meaning to the sacrifices that they have made.  Do we have any “Gold Star” family members here today?

While Memorial Day is a special holiday set aside to reflect on the service of our armed forces, it should by no means be the only day of the year in which we keep our servicemen and women in our hearts and minds.  We should think about their sacrifice every day.  We should recognize that this generation, like past generations, is serving in combat zones and keeping watch in faraway lands.  Those who serve are a special group.

I would like to pause here to let you say out loud the name of a lost loved one.  I remember Sergeant Michael Lief 7 Dec 1969, Staff Sergeant Chris Frost 4 Mar 2008, COL James Scott and MAJ Stuart Wolfer 6 Apr 2008.  Always Remember; Never forget!

Lee Greenwood sings a particularly sentimental song with the assurance that….he would gladly stand up and defend [America] today. God Bless the USA! And today, as we should each day, we say God Bless those who have given of their lives to make America strong and to those who remain prepared to fight for our country today.

Today we honor all who have given their lives for the rest of us and I leave you with a quote from John 15:13 says “Greater love hath no man than this, that he lay down his life for his friends.”

God Bless America and thank you for sharing this Memorial Day!